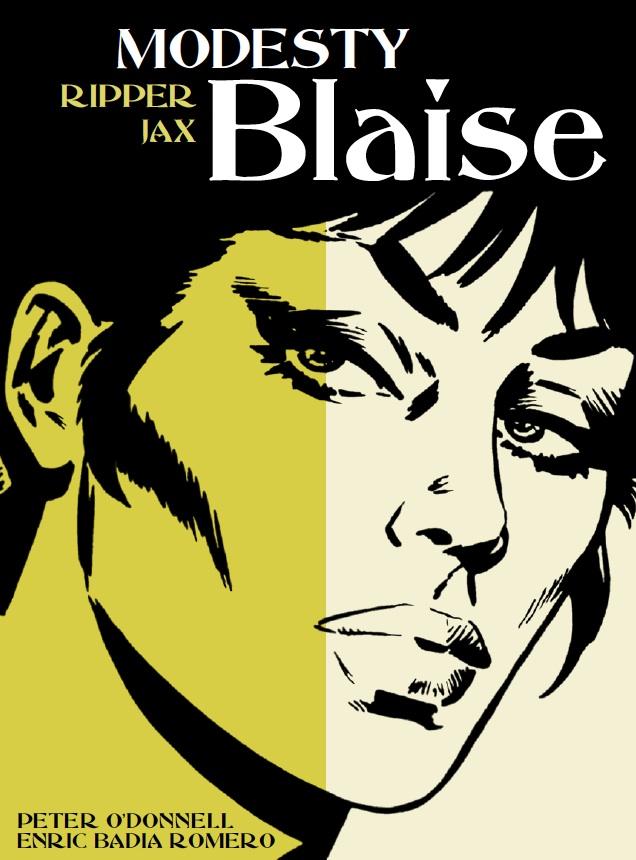 The spy-adventure comic strip Modesty Blaise, created by writer Peter O’Donnell and illustrated initially by Jim Holdaway, began its run in the London Evening Standard in May 1963 and quickly achieved wide international circulation.  The title character is one of the definitive female action heroes of the 1960s, a former master-criminal turned freelance adventurer—beautiful, brilliant, and deadly to her foes.  O’Donnell recounts Modesty’s origins in a 1966 story:  “In the Beginning” presents Modesty as a traumatized orphan fleeing a Greek prison camp in 1945, living wild and begging and stealing to survive.  In a Persian camp for displaced people, she is befriended by an elderly professor who becomes her tutor and gives her the name “Modesty.”  Her self-chosen surname comes from an obscure corner of Arthurian legend:  Blaise was Merlin’s teacher.  Following the professor’s death, Modesty falls in with a criminal gang in Tangier, the first step in her rapid ascent to the top of an international crime syndicate, “The Network.”  Here she meets Willie Garvin, the Cockney lad who becomes her sidekick and confidante when the two leave the underworld in favor of an adventure-filled retirement on the side of good.

Owing to the strip’s place amid the spy craze of the mid-1960s, comparisons to James Bond are inevitable, and Modesty Blaise certainly shares with the Bond mythos a strong connection with the stylish internationalism, consumerism, and sexual liberation reflected in so much of the period’s popular culture. Unlike Bond, she is not an employee of the Secret Service.  British spymaster Sir Gerald Tarrant is a friend whom Modesty assists on a purely voluntary basis, motivated by her own desire for adventure as well as her commitment to justice.  The strip also invites comparison with ITV’s television program The Avengers (1961-69), whose female co-star, Honor Blackman, had recently earned fame as the anthropologist and judo-master in kinky boots, Dr. Cathy Gale, the precursor of Diana Rigg’s Emma Peel.  Like Cathy Gale, Emma Peel, and virtually every female action hero of the 1960s and beyond, Modesty Blaise embodies contradictory elements:  she is a smart, strong, and competent woman with a tendency to strike pin-up poses.

The 1966 release of Joseph Losey’s camp film adaptation marks the peak of the character’s fame, but the strip continued until 2001 and remains in print at present in a series of collections published by Titan Books.  O’Donnell also wrote thirteen Modesty Blaise novels between 1965 and 1996, and a television pilot episode was produced in 1982, as well as another film adaptation in 2003.  As recently as 2014, BBC Radio 4 has aired radio plays featuring the character, who retains her cachet as an emblem of 1960s cool.