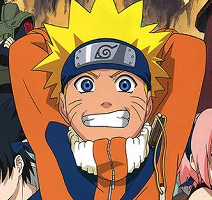 In 1997, Masashi Kishimoto’s Naruto began as a “one-shot” (a single issue) in Akamaru Jump (Weekly Shōnen Jump‘s seasonal publication). In 1999, it was serialized in Weekly Shōnen Jump. Naruto is the third best-selling manga of all time (with Eiichiro Oda’s One Piece ranked first and Akira Toriyama’s Dragon Ball ranked second).

The manga focuses on an orphaned child, Naruto Uzumaki. On the day of Naruto’s birth, his village was attacked by a nine-tailed fox, Kurama. Naruto’s father, the Fourth Hokage of Konoha, sealed the beast inside infant Naruto at the cost of his own life. Though harboring this chakra monster for the good of humanity, Naruto is shunned and neglected. To his village, Naruto is a painful reminder of those who died battling Nine Tails (Kyūbi). Although he has virtually no outside source of love or encouragement, Naruto remains a portrait of resilience. He has every reason to be embittered but remains open to those around him: trying to win their affection and attention. Additionally, Naruto struggles to control the chakra monster imprisoned within him. Kurama’s power can make Naruto an unstoppable force, but it can also destroy him and those closest to him. Naruto begins to receive the care and guidance he deserves while at Konoha’s ninja school (akademī). Here, Naruto‘s extended cast of characters is introduced. Teachers, students, and even some foes are eventually won-over by Naruto’s indomitable spirit. Most of Naruto‘s story arcs follow a particular mission where, invariably, the young ninjas learn the value of teamwork, friendship, and compassion.

One of Naruto‘s most powerful aspects is the presentation of its villains. Frequently, Masashi Kishimoto introduces characters whose ruthless nature appear beyond redemption. Chapter by chapter, fear and hatred accumulates within the reader. Nonetheless, in a critical moment, the villain’s back-story reveals a soul-shattering history of abuse, manipulation, and neglect. Reader rage dissolves into tear-filled empathy. While there are many such villains (Nagato, Itachi, Sasori, Haku, Zabuza etc.), one in particular resounds with readers: Gaara, a seemingly sociopathic child. In the case of Gaara, the reader sees the path that Naruto could have taken. As the vessel for a tailed beast and despised by his village, Gaara mirrors Naruto. However, unlike Naruto, Gaara becomes withdrawn and cruel. As Gaara’s back-story unravels, readers realize how closely Naruto and Gaara’s circumstances are … how closely Gaara resembles a beloved character. By repeatedly employing this technique, Masashi Kishimoto reminds his readers that people are rarely evil. And, as with Gaara, that sometimes even the most misguided can be rescued with kindness and understanding.

Instead of a floating timeline where characters are locked into perpetual childhood, Naruto is a coming-of-age story. The manga follows Naruto and his friends as they physically and emotionally mature from children to young adults. Therefore, readers see how both positive and negative encounters impact who a person ultimately becomes. Remarkably, even though the characters fully mature, the writing never outpaces its younger readers. Naruto is heavily influenced by both Dragon Ball and One Piece: all of whom have charming but intellectually challenged protagonists. Not only does this allow young readers to follow the manga with ease, but it renders Naruto flawed and, thus, relatable.

Though Naruto‘s last chapter was published on November 10, 2014, a spin-off entitled Naruto Gaiden: The Seventh Hokage and the Scarlet Spring (Naruto Gaiden: Nanadaime Hokage to Akairo no Hanatsuzuki) began on April 27, 2015. This series follows adult Naruto, his friends, and their children. 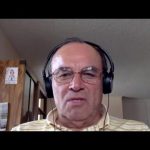 Albert Morales, Impacto vs. the World