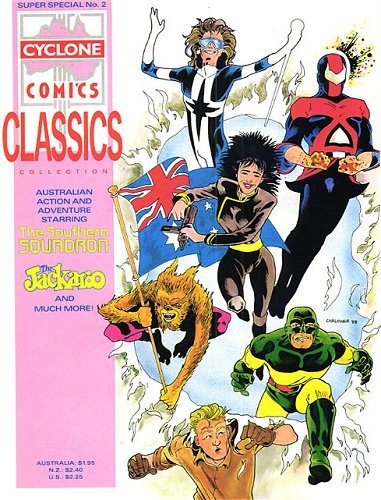 Cyclone Comics embodied the creative excitement and commercial frustrations which underscored the fitful revival of Australian comic books throughout the 1980s. The writers and artists gathered under its banner infused their interpretations of American comic-book archetypes with an irreverent, knockabout spirit which came closest to articulating a distinctively Australian comic-book style. Cyclone Comics eventually succumbed to the economic constraints of the Australian publishing market, which drove its key creators to pursue greater opportunities abroad. The rise and fall of Cyclone Comics would, in many ways, become a recurring theme of Australian comics for years to come.

Local audiences reveled in the comic’s tongue-in-cheek heroism, which was cheerfully fostered by the contributors’ frequent appropriation of one another’s characters in cross-over stories, creating the type of self-contained, fictional universe which had long been a staple element of American comics, but was rarely seen in Australian comics.

Cyclone Comics also undertook additional projects to complement its flagship title. Cyclone Comics Super Special (1987-1988) showcased one-off projects, such as The Adventures of Garry “Goo-Goo” Gillespie, a charity-fundraiser comic about a pre-teen tennis prodigy, while The ¼ Acre Kids (1988) was a humorous titled geared towards younger readers.

The biggest change occurred in 1987, when Cyclone Australia was renamed The Southern Squadron with the ninth issue, a commercial acknowledgement of the team’s popularity with readers. Despite steady sales growth, the pressures of maintaining this self-financed publishing enterprise in the comparatively small Australian comics market proved insurmountable, and the comic ceased publication in 1989. While a new publisher, Southern Cross Comics, subsequently assumed production of the solo Dark Nebula comic (1989-1991), the remaining nucleus of the Cyclone Australia team – Chaloner, De Vries and Lumsden – found more lucrative opportunities working for US publishers at the height of the black-and-white comics craze in the early 1990s.

Gary Chaloner resurrected the imprint with Cyclone Comics Quarterly (1992-1994), featuring the macabre exploits of his newest creations, The Undertaker and Dr Moth, illustrated by Ashley Wood. The slickly-produced magazine capitalized on the then-current vogue for grim, violent antiheroes, in order to establish a new identity for the Cyclone Comics brand. Sadly, the magazine’s unremittingly bleak tone seemed an almost deliberate renunciation of the comic’s original, lighthearted incarnation.