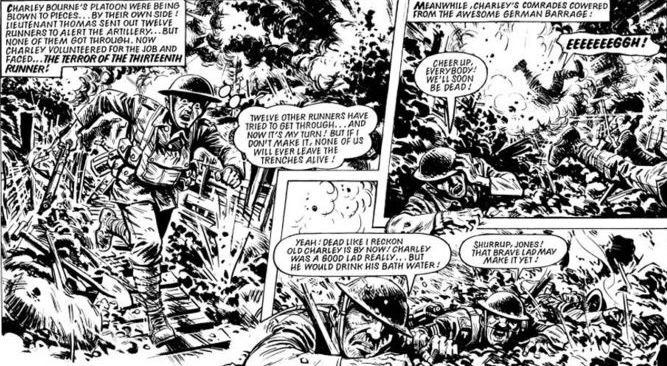 Charley’s War was a British comic created by Pat Mills (writer) and Joe Colquhoun (artist) that ran from 1979 until 1985 and followed the life of an underage soldier fighting for the British army during the First World War. For the majority of its run, Charley’s War was an examination of life in the trenches, bringing a gritty dose of reality to a genre the tended to glorify conflict. At the time of publication, war comics tended to be adventures depicting great heroic achievements. Rather than idealizing battle, Mills and Colquhoun sought to show the harsh truths soldiers on the front line faced, from poor living conditions to the reality that death could come at any moment. It is not uncommon for a well-established character to be picked off by a sniper or die in a random battle without any typical narrative foreshadowing, as it tends to be in real-life. In not shying away from these realities, Colquhoun’s visuals gave a mainstream audience a view of war that many had never experienced.

Charley’s War tells the story of Charley Bourne, a sixteen-year-old boy whose love-of-country and desire for glory led him to trick recruiting officers about his age so that he might enter World War One a couple of years early. Despite not lying about his date of birth on this application, recruiting officers overlooked the discrepancy (either accidentally or willingly, it is not made clear) and send him to the front line. Upon arriving on the banks of the River Somme, Charley quickly learns that glory in war is a myth, and the number one goal of any soldier is to just stay alive. Unprepared for these realities, Charley is nonetheless stuck and forced to forge his way the best he can.

While Charley’s War spends most of its time with Charley, it occasionally also tells side stories about other characters. Quite a few issues are devoted to life on the German side, with some specifically about Hitler as a young man fighting for them. Charley’s younger brother Wilf also makes some appearances later on in the war as he looks to become a member of the British Air Force. These stories help flesh out the reality of these characters and often show that sometimes the enemy within can be the most dangerous.

Charley’s War is one of the most successful British comics; the research done by Mills and Colquhoun to paint as accurate a picture as possible as well as the portrayal of the harsh realities gave it a weight that few other comics could match. But it never came to its natural conclusion. Mills left the project in early 1985, and Scott Goodall took over writing. Goodall wrote it more as a heroic adventure story, and as such, it lost much of what made it so fascinating. Just a few months into Goodall’s run, Colquhoun became ill and was forced to quit the comic as well. Rather than find a new artist, the project was brought to a premature close.