Your Brain on Latino Comics 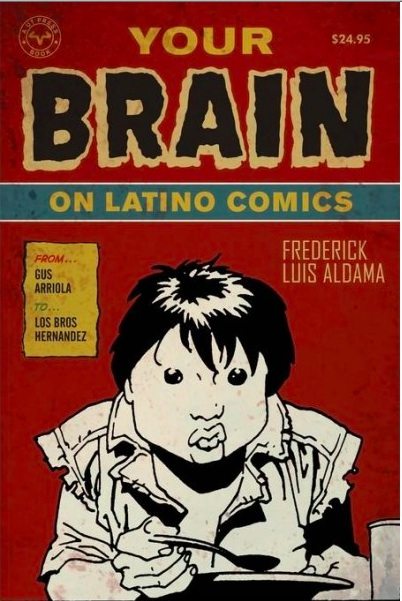 Though the field of comic book studies has burgeoned in recent years, Latino characters and creators have received little attention. Putting the spotlight on this vibrant segment, Your Brain on Latino Comics illuminates the world of superheroes Firebird, Vibe, and the new Blue Beetle while also examining the effects on readers who are challenged to envision such worlds.

Exploring mainstream companies such as Marvel and DC as well as rising stars from other segments of the industry, Frederick Aldama provides a new reading of race, ethnicity, and the relatively new storytelling medium of comics themselves. Overview chapters cover the evolution of Latino influences in comics, innovations, and representations of women, demonstrating Latino transcendence of many mainstream techniques. The author then probes the rich and complex ways in which such artists affect the cognitive and emotional responses of readers as they imagine past, present, and future worlds.

Twenty-one interviews with Latino comic book and comic strip authors and artists, including Laura Molina, Frank Espinosa, and Rafael Navarro, complete the study, yielding captivating commentary on the current state of the trade, cultural perceptions, and the intentions of creative individuals who shape their readers in powerful ways.

‘Holy funny pages, Batman!’ Fred Aldama’s Your Brain on Latino Comics tears open new tierra as its savvy x-ray vision parses Latino visual culture. With voracious eyes attuned to word-image conspiracies, grandmaster Aldama’s ink-stained hands reveal the legacy and destiny of ‘American’ comics. This is a go-to book for profs in ethnic/cultural studies and communications. Jump into a phone booth and reach for your hot spandex tights—Aldama’s lush, semiotic alchemy will have you leaping buildings in a single bound!

Your Brain on Latino Comics is a much-needed addition to the field of Latino studies, serving as a bridge between a rich Latino comics history that has been paid little scholarly attention in the past and a thriving contemporary Latino literary culture that was widely influenced by Latino comics like Love & Rockets.

Your Brain on Latino Comics provides “scholars with a rich map of Latino contributions to comic art and suggesting several paths for pedagogical and scholarly engagement. . . . The three sections of Your Brain on Latino Comics form a foundation from which Latino/a studies scholars can begin to address the oversight not only of well known figures like Los Bros Hernandez but also dozens of other artists who offer fresh perspectives on Latino/as in the U.S. and on the comic book form.

Aldama discusses how comics as a medium deserve a unique set of analytical tools. He believes that other disciplines’ approaches—those used in visual art or film, for example – cannot account for the unique characteristics of comics, particularly the relationship between textual information, visual information, and the overall narrative intention. . . . Aldama opens the door for a critical reevaluation of non-mainstream comics.

MELUS: Multi-Ethnic Literature of the U.S.

The interviews tackle the economics of the business, the physical production and storycraft, philosophies of art, and personal histories. These provide an excellent resource that illustrates the richness and complexity of the field. . . . By providing this forum and allowing for disagreement, Aldama breaks down the false notion of a monolithic “Latino comics” and allows Latino creators to express the diversity of their community as well as the diversity of their views on the political nature of their work.

From Amazon | From UTexas Press