Spilling the Beans in Chicanolandia 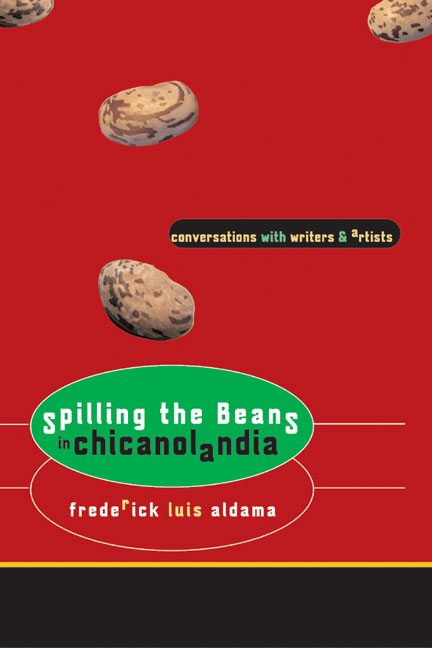 Since the 1980s, a prolific “second wave” of Chicano/a writers and artists has tremendously expanded the range of genres and subject matter in Chicano/a literature and art.

Building on the pioneering work of their predecessors, whose artistic creations were often tied to political activism and the civil rights struggle, today’s Chicano/a writers and artists feel free to focus as much on the aesthetic quality of their work as on its social content. They use novels, short stories, poetry, drama, documentary films, and comic books to shape the raw materials of life into art objects that cause us to participate empathetically in an increasingly complex Chicano/a identity and experience.

This book presents far-ranging interviews with twenty-one “second wave” Chicano/a poets, fiction writers, dramatists, documentary filmmakers, and playwrights. Some are mainstream, widely recognized creators, while others work from the margins because of their sexual orientations or their controversial positions. Frederick Luis Aldama draws out the artists and authors on both the aesthetic and the sociopolitical concerns that animate their work. Their conversations delve into such areas as how the artists’ or writers’ life experiences have molded their work, why they choose to work in certain genres and how they have transformed them, what it means to be Chicano/a in today’s pluralistic society, and how Chicano/a identity influences and is influenced by contact with ethnic and racial identities from around the world.

This is a most absorbing book, for the authors interviewed here perform as live and also quite lively voices, inviting the reader to sample their art…. The book succeeds in defining the achievement of a significant literary generation.

Aldama has effectively rewritten the standard for conducting interviews. While all his authors are deeply interesting, what’s wonderful is how each interview develops in its own unique way. It’s quite clear that Aldama is asking the questions, but he’s also responding to the answers. As a result, all the interviews make for great reading.

Spilling the Beans, with a very well-chosen slate of artist and author interview, reveals the construction of a body of thought on aesthetics in second-wave Chicano writing, one that is inclusive in genre—artistic and literary—and that neither necessitates nor excludes the political activism of the first-wave resistance writers. Aldama writes his introduction with the panorama in mind, calling attention to the true beginnings of Mexican American writing occurring more than a century ago, and moves ahead through the present with analytical commentary of his own as well as with a review of critical works to date, and a selected bibliography for further study. . . .

The inclusive nature of the genres represented in Aldama’s work is particularly welcome and satisfying: first, because Latino works have developed across genres—the Latino writer most often produces work in more than one genre at a time—and the developing body of Latino work demonstrates a conscious flexibility in artistic form; and secondly, because there is need for a critical work that reflects this development. This can be seen in the way Jose David Saldivar looks at the construction of culture in Border Matters (1997) but now through the works and with the voices of individual authors and artists as Aldama has done here. . . .

Borderland aesthetics is about the margin. And these second-wave authors address the margin in one way or another throughout this collection of interviews. The border as geographical demarcation shifts, but the margin remains. The exploration of marginality has important voices in Gloria Anzaldúa and Cherríe Moraga: expressions of influence heard in both Spilling the Beans and in One Wound. Francisco X. Alarc6n, in his interview with Aldama, defines the margin of “grief and joy” of writing from a gay Chicano poet’s perspective, commenting that he knows the inseparable nature of the personal and the political for himself because of what Anzaldúa and Moraga have given to feminist and to Chicana feminist understanding (41). Moraga’s mentoring on the stage and in the classroom is significant for many, such as for Richard Bracho, who tells the story of his entrance in theater through early guidance from Moraga and of his later work with her as peer and colleague. Moraga says, in her own interview in Spilling the Beans, “I can write the wound, or I can put my finger to the wound, and that’s where healing takes place” (169).

The marginal is always complex in its liminal space. Whether the artists view the steppingback and forth among realities as energizing or disturbing, for all second-wave Chicano artists the margin is creative departure. Daniel Olivas says, “Border literature is beautiful . But that’s not my story” (208), noting that once we really look at the Latino experience, “The grid becomesso complex that there’s no way anyone can tell me there’s only one way Chicano literature should be” (209). His own characters experience discrimination for a number ofreasons including those of a Jewish/Catholic margin in middle-class neighborhoods. Jaime Hernandez, of comic book writers Los Bros Hernandez, notes that growing up he listened to ‘”white-boy music and so was kind of an outsider . If you’re inside it you kinda don’t get to observe it much;if you step back a little bit, you can see how it relates to the rest of the world and how the rest of the world relates to it” (121).

Publication acceptance has often continued to be a marginal space for second-wave Chicano artists and authors. The Internet and the expansion of other media sources work as unifying opportunities in the expression and distribution of work. However, even those, who, like Daniel Olivas, have taken good advantage of web connections and publishing, comment on the difficulty of publication acceptance through traditional channels, saying “Agents won’t touch many of us, don’t want to take the risk” (211). Cross-border contacts, such as the now well-known conferences organized jointly by Chicano and Mexican authors, open doors, however tentative. A good number of authors here thank the small to mid-size publishing firms like Curbstone Press who have helped launch careers, creating and maintaining good relationships and exchanges on either side of the border. Especially as Chicanos have entered academe, university presses and stages have been steady, if not somewhat limiting, sources of distribution. Richard Montoya, in his interview with Aldama, says that he believes ‘”we’ve paid a price for this mixing up of different forms in the academic and Latino playwright world. We’re never really included. I think it’s because of our roots in comedy” (145). The perception, if not the lingering reality, of audience response is one that still casts a shadow. But the power in their performances leaves no doubt. Luis Urrea speaks of the ten years it took for his first book, Across the Wire, to be published (1983-1993): “I was told to change my name so I’d sound Anglo” (266). Urrea also mentions the work he is, at the time of the interview, about to publish, the story of his great-great aunt, The Hummingbird’s Daughter (2005). . . .

For all the authors/artists included in Spilling the Beans, telling stories in multiple genres and their ability to create through and beyond the margin, into the expanding metaphor of their own work, distinguish them and their generation. Luis Rodriguez, whose essays, poetry and short stories arise from turmoil in ever-hopeful waves, reaffirms the generation’s commitment. Commenting on his Hearts and Hands, he says,how the “bringing people together “doesn’t require millions of dollars. It requires a shift in your thinking, a shift in your imagination as a community” (244).