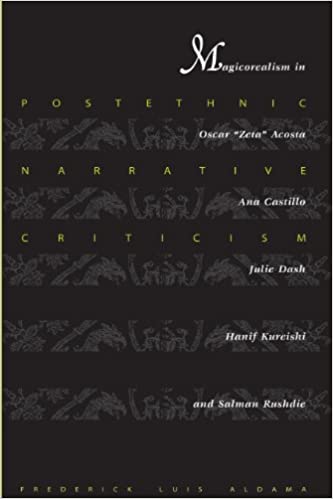 Magical realism has become almost synonymous with Latin American fiction, but this way of representing the layered and often contradictory reality of the topsy-turvy, late-capitalist, globalizing world finds equally vivid expression in U.S. multiethnic and British postcolonial literature and film.

Writers and filmmakers such as Oscar “Zeta” Acosta, Ana Castillo, Julie Dash, Hanif Kureishi, and Salman Rushdie have made brilliant use of magical realism to articulate the trauma of dislocation and the legacies of colonialism that people of color experience in the postcolonial, multiethnic world.

This book seeks to redeem and refine the theory of magical realism in U.S. multiethnic and British postcolonial literature and film. Frederick Aldama engages in theoretically sophisticated readings of Ana Castillo’s So Far from God, Oscar “Zeta” Acosta’s Autobiography of a Brown Buffalo, Salman Rushdie’s Midnight’s Children, Shame, The Satanic Verses, and The Moor’s Last Sigh, Julie Dash’s Daughters of the Dust, and Stephen Frears and Hanif Kureishi’s Sammy and Rosie Get Laid. Coining the term “magicorealism” to characterize these works, Aldama not only creates a postethnic critical methodology for enlarging the contact zone between the genres of novel, film, and autobiography, but also shatters the interpretive lens that traditionally confuses the transcription of the real world, where truth and falsity apply, with narrative modes governed by other criteria.

Aldama’s book adds another perspective to the extensive and charged critical debates in English regarding the use of the term magical realism to characterize third world or postcolonial literatures. . .

The‘‘postethnic’’of the book’s title not only signiﬁes the junction of (British) ‘‘postcolonial’’ and (U.S.) ‘‘ethnic,’’ it also announces the author’s interest in moving beyond reading narrative through ontology or ethnopoetics. Aldama’s inventive critical impulse likewise coins the term magicorealism as an alternative to magical realism and magic realism, both common in English-language criticism. The neologism refuses to subordinate adjective to noun (or vice versa), while it also ‘‘identif a new study that is careful not to confuse the transcription of the real world… with the narrative mode governed by other criteria’’ (15). . . .

In this study, magicorealism is above allaludic mode of narration, ‘‘a rebellious aesthetic’’ (19), whose primary impact is defamiliarization. Instead of yielding information about the other, magicorealism’s self-referentiality parodies the ethnographic impulse, while also drawing attention to those marginalized or excluded from history (20)….

By insisting on magicorealism as anaesthetic tool rather than an ethnographic practice, Aldama rejects the work of critics who view magical real-ism as an expression, however mediated, of postcolonial and neocolonial realities or an anti-imperialist poetics. . . .

His work clearly expands our understanding of magicorealism as a global English-language literary style identiﬁed with post-colonial and ethnic writers.”

Scholar Frederick Luis Aldama makes the case that the term has encouraged critics and readers to misread Latin American literature, particularly in regard to their ignoring the very real and important economic, political, and cultural dimensions of the works. . . .

Aldama coins the term “magicorealism” to differentiate between what he claims to be genuine and authentic use of the narrative style (Rushdie and Castillo) from the consumerist term “magic realism” and various simplistic imitations (Isabel Allende and Sandra Benitez). The difference between the two, he argues, is that the metafictional, self-reflexive work, by calling attention to itself as a fiction (as in Márquez or Rushdie or Acosta) prevents the reader from falsely understanding magical realist qualities as some verifiable characteristic of a primitive people, some actual part of their belief systems. The playfulness of genuine magicorealism, he claims, prevents primitivizing of the other, the foreign, the exotic. In the simplistic imitations, the reader is led to confuse the art with the reality and free to imagine that characters (and societies, cultures) live in some exotic land of the miraculous, and are therefore re-moved and irrelevant in some way. Confusing the text, the magic of the writing, with reality thus discourages readers from concerning themselves with the economic exploitation and political manipulation of such strange and fantastic subaltern others in postcolonial countries. . . .

Perhaps the most daring and interesting thing that Aldama does in this book is suggest a sort of reclassification of experimental, nonrealist works of literature. In his view, the overall category is magicorealism and all sorts of narrative experimentation become subcategories in this larger sphere, replacing, it seems, post modernism with magicorealism. What was once, for me anyway, a type of post modernist prose or a specific narrative device associated with high modernism is, for Aldama, something that falls under the larger heading of magicorealism. . . .

Postethnic Narrative Criticism asks that readers rethink their critical interpretive lens (remove the magical realist rose colored glasses in a sense) and see in the art itself that more often than not these artists are in fact critiquing concrete realities about people within the economic, racial, and ethnic fringes of societies in the world. Appreciation of the comic element of these works and understanding of the self-reflective nature of this type of narration, he argues, will lead the critic to underestimate no longer the postcolonial realities beneath the game playing. Thus, he speaks of the importance of the “mime-sis-as-play” tradition from Cervantes to Joyce to Rulfo (34). The best parts of Aldama’s work highlight the comic traditions of parody, hyperbole, and the carnivalesque, the pícaro and the trickster, and the narrative games of mixing genres. These are elements of narrative that alter perspectives and might eventually “affect our vision of the world” (109).

To be sure, Postethnic Narrative Criticismis not the first work to chide post structural, postcolonial critics for their obliviousness to the potential objectification and exploitation of the subject/object, humans relegated to a theoretical function. But the book is a clarion call for making a crucial distinction between formal but politically inflected analysis and less nuanced critical approaches that create the illusion that the critic somehow engages in the actual playing field of political and material change and struggle. . . .

In essence, the critic who analyzes cultural production does not create or even correctly identify a more “fluid,” “radical,” “hybrid” “contact zone” where postmodern, postindustrial “subjects” have the freedom to recreate or re-imagine themselves. To believe that the critic reads through narratives into actual material existence, what Aldama refers to as “ontology,” is a delusion that leads to a critical dead end. More damningly, it ignores the real suffering of real human beings. . . .

Aldama argues that to mistake the radical malleability of the fictional, textual subject for the actual condition of the Other (his/her ontological state) is to suggest that the political and material reality of the subaltern can somehow magically be remedied through theoretical interventions. This is a form of critical hubris that risks exploiting the very groups of people progressive forms of criticism seek to champion. . . .

Aldama seeks to open up the critical appraisal of the subgenre by focusing on the formal qualities of the work, identifying a practice of magical realism that is a “vital and sophisticated use of language and storytelling device “rather than the more” commercially oriented, lazy and clumsy storytelling form” (12). In doing so, Aldama makes a case for magicorealism as a comparative matrix, thereby circumventing the usual critical problem of linking ethnic and postcolonial cultural production either by thematic grouping or by “large, baggy, ideological paradigms” (13). . . .

But ultimately the power of Aldama’s fine study lies in its role as a corrective to a form of post structural/postcolonial criticism that has defined its subject in ways that either lend themselves to exploitative theories of “otherness” and essentialized visions of the “primitive” exotic, or overlook the “rebellious aesthetics” of the magico realist text in pursuit of an ontology of the subaltern subject that, Aldama argues, does not exist in the “real” world. The text is the thing, and the text is enough if what we are after is an expansive, even revolutionary, new way of “seeing.”

It is rare that we come across a truly great book, one in which fierce intelligence assets itself in pages that truly matter. Such a book assigns us the task of reordering what we have taken as true on the promise of an understanding more profound. In such a book, we are guided by extraordinary vision, by an author with keen insight. In the rarest of occasions, we read works that are wise, words that make broad connection and interrogate a range of thought that afterwards we deem necessary. Postethnic Narrative Criticism is such a book: Frederick Aldama is such an author.

In this insightful and forceful study of magical realism, Aldama successfully argues that a true postethnic and postcolonial criticism should not (con)fuse the world with the text. His commentaries on Castillo, Dash, Kureishi, Acosta, and Rushdie force the readers to see these artists’ magicorealist work in a new light, thus revealing all of their splendid and contradictory complexities Aldama’s book is a must for anyone who wishes to understand the intricacies of magical realism and the vitality of this genre in contemporary European postcolonial and ethnic American literature and scholarship.

Through a study of the playful narrative techniques of writers and filmmakers such as Dash, García Márquez, Rushdie, and Kureishi, Frederick Luis Aldama offers a powerful critique of those who view magical realism as either a means toward postcolonial resistance or a depiction of some exotic real world. Proposing a ‘postethnic’ approach, Aldama argues convincingly that a reader’s or viewer’s understanding of the aesthetic dimensions of what he calls ‘magicorealism’ can lead to greater political understanding than older, more ideologically oriented interpretations.