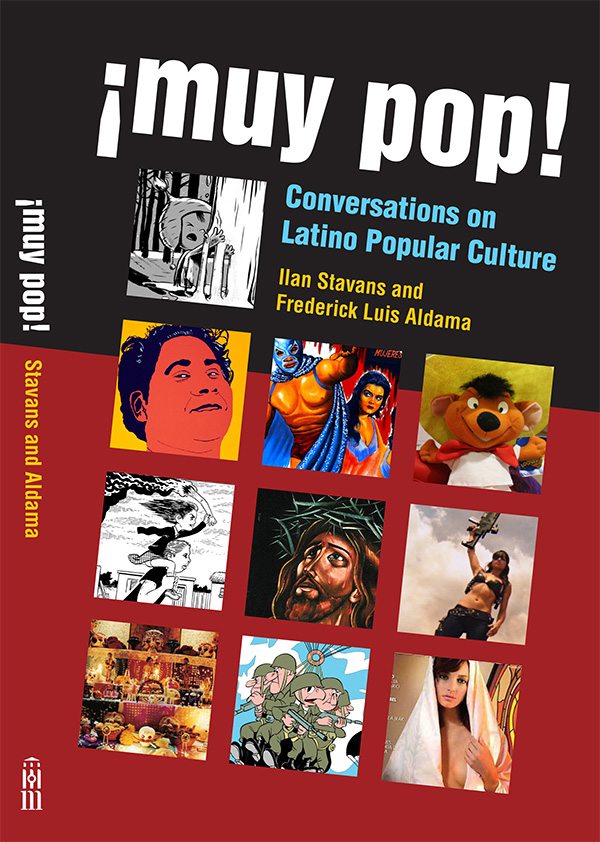 In ¡Muy Pop!, Ilan Stavans and Frederick Luis Aldama carry on a sustained, free-flowing, book-length conversation about these questions and more, concentrating on a wide range of pop manifestations and analyzing them at length. In addition to making Hispanic popular culture visible to the first-time reader, ¡Muy Pop! sheds new light on the making and consuming of Hispanic pop culture for academics, specialists, and mainstream critics.

To my enormous delight, when I cracked open ¡Muy Pop! I didn’t find a traditional academic book: a narrative cut into chapters filled to the brim with Academicspeak. Instead, I was blown away by a stunningly choreographed verbal mambo that invites one to look and learn from two dueling magicians à la Cervantes. . . . As one poignant and playful sharp conversation transmutes into the next, we see two great minds battle it out on all fronts, touching on a wide range of rarely explored topics of Latino art and culture: from what it means to be ‘Hispanic’ to unique revelations on Cantinflas, narco films, comic books, religion, the space/time continuum, and yes . . . even tomatoes! ¡Muy Pop! is an addictive, adrenaline-charged conjunto of language and ideas. Stavans and Aldama carefully compose a series of contrapuntal Latino sights, sounds, and tastes to make a master-class narrative—a Hitchcock by Truffaut refrito reel of sorts—filled with penetrating précises and plentiful passions. What can I say—¡Muy Pop! is a multi-sensorium journey where we encounter philosophy, history, and the modern myths of our people. It’s a blast!

Mary Beltrán, Associate Professor at the University of Texas, Austin
and author of Latina/o Stars in U.S. Eyes: The Making and Meanings of Film and TV Stardom and co-editor of Mixed Race Hollywood

Stavans and Aldama gracefully inform and wonderfully entertain in this riveting conversation on the bountiful, multifaceted, and often-slippery subject of Latinos and popular culture today. ¡Muy Pop! takes readers on a rousing journey as Stavans and Aldama explore the history and meanings embedded in Latino cultural forms and artifacts on both sides of the U.S.-Mexico border, honing in on related dynamics of memory, migration, resilience, and especially pleasure in these flows. Graphic novels and comic strips, Cantinflas and Latino humor, ranchera and El Santo films, heroism and gender dynamics, performance art, Latinos’ enduring love for telenovelas and kitsch, and the contemporary Latinization of American popular culture. All of these subjects and more are illuminated in ¡Muy Pop!—a richly imagined convivo that we are lucky to have been invited to eavesdrop on.

From Amazon | From University Michigan Press | From Barnes & Noble