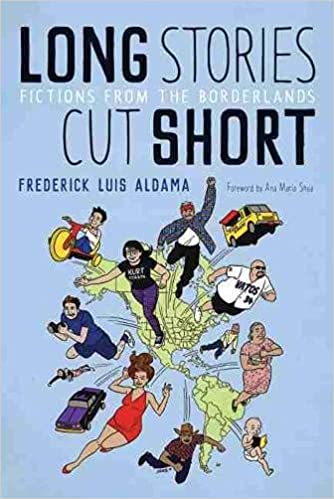 The stories in this dynamic bilingual prose-art collection touch on the uni­versals of romance, family, migration and expulsion, and everyday life in all its zany configurations. Each glimpse into lives at every stage—from newborns and children to teens, young adults, and the elderly—further submerges readers in psychological ups and downs. In a world filled with racism, police brutality, pov­erty, and tensions between haves and have-nots, these flashes of fictional insight bring gleaming clarity to life lived where all sorts of borders meet and shift.

Frederick Luis Aldama and graphic artists from Mapache Studios give shape to ugly truths in the most honest way, creating new perceptions, thoughts, and feelings about life in the borderlands of the Américas. Each bilingual prose-art fictional snapshot offers an unsentimentally complex glimpse into what it means to exist at the margins of society today. These unflinching and often brutal fic­tions crisscross spiritual, emotional, and physical borders as they give voice to all those whom society chooses not to see.

Long Stories Cut Short reads like an invitation from a trickster figure, as if a playful conductor were giving you deliberate doses of a larger tapestry, one that can only be fully understood within the ever-expanding canvas that is the reader’s capacity to imagine, create, and believe that what they are reading has a greater significance to their understanding of the world.

These bilingual stories are the work of a confident writer, one who is not fazed by social media but influenced by it, picking up poetry from Twitter and finding unexpected pathos in Instagram selfies.

Dagoberto Gilb, author of Before the End, After the Beginning

You want traditional border tales? Not even the storytelling here.

You want nostalgia and sweetness, colorful escape? Nope, won’t find that. What then? Aldama’s is graphic reality, in bold typeface, lines as abrupt as single words—go, allá, fast, ya.

Aldama pulls no punches with his panoply of characters surviving in the borderlands of the Americas. Long Stories Cut Short  is a revelation—it reveals. A brilliant, manic, kaleidoscope of a book.

Aldama flashes through holy decay of urban ghosts still whisperin’ six feet under & those danglin’ 5′  4″  above ground holding on to Xbox, domestic & city cancers of one type or another & puffy-gut boyfriend existences. This is a rare, veneer-stripped, cracklin’ kaleidoscope of lives: half midnight, half dawnlight (if you can locate it), leaking true life the way you don’t wanna see it (with steely-soul ink by Mapache Studios)—a half-nasty cup of Bukowski, an elegant shot of Kurosawa & an ant-horde dish of Buñuel. Buzzin’ from start to finish, an unexpected bilingual knock-out punch!

In Frederick Aldama’s Long Stories Cut Short, human lives tumble through a riot of possibility—jobs that materialize and then vanish, language that slides and elides, love that sometimes unexpectedly endures. To read this graceful, powerful book is to enter a heady universe where lives entangle, creating unexpected unions, and where language itself becomes invigorated, full of surprising resonance—sometimes witty, sometimes grief-soaked, always driven by Aldama’s sparkling intelligence.

David A. Colón, author of The Lost Men

Long Stories Cut Short  makes the local massive and the massive local. The stories resonate as a chorus of soloists, with so much life to each voice. And from the visual poetry of ‘Cell 113 / Celda 113’ to the magic realism of ‘Six Feet Under / Dos metros bajo tierra,’ Aldama ranges widely through a re-envisioning of forms within borderland consciousness. Remarkable to think this impressive fiction is a debut.

Denise Chávez, author of The King and Queen of Comezón

This collection of tightwire tales where life is a daily balancing act asks, In what language do we articulate desire and need, love and hate? You choose. With polish and skill, the tale is told first in English, then in Spanish. Each version spins and swirls like carnival lights that form a backdrop for a living circus of souls. Aldama stuns, surprises, and delights. This is no small feat. He is a linguistic trapeze high-wire artist and delivers verbal theatrics, the likes of which will stay in your mind and heart for a very long time.

Michael Nava, author of The City of Palaces

These short fictions are like breaths, some deep and sinuous, some mere gasps. Beautiful, startling, disturbing, moving. They cut to the bone. A brilliant debut.

Francisco X. Stork, author of The Memory of Light

Each story is a pulse of light reflected in our multifaceted Latino experience and refracted by the music of our two languages to reveal a dazzling prism of happy-triste colors.