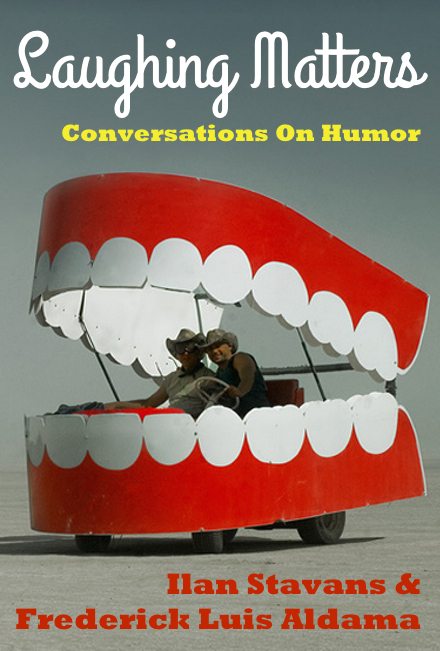 Do you dig humor, comedy, critical theory, literary criticism, philosophy, television, and mass media studies all wrapped up together? Then Laughing Matters by Latino Frederick Luis Aldama and Ilan Stavansis the book for you. Laughing Matters finds two comedic scholars talking seriously about the ludicrous. Or are they speaking ludicrously about the serious? And does it matter which is which?

Laughing Matters by Aldama and Ilan Stavans takes you on a journey that explores how laughter makes us human along with the importance of the universal impulse to create instances (oral, written, visual, and gestural) of humor. They argue that humor is central to any theory of aesthetics. To sharpen further our understanding on humor, they invite readers to the table some of history’s grand penseurs, such as Plato, Aristotle, Hobbes, Schopenhauer, Kant, Freud, Bergson, and Koestler. Some of the questions that arise include: Why do we laugh unintentionally in a film that’s meant to be horrific? Why do we laugh while watching a Tex-Avery cartoon when an animated wolf explodes into pieces? How can it be that we both laugh and understand the seriousness that undergirds a novel like Don Quixote? Why do we laugh in stressful, even dangerous situations? Why do some laugh when engaging in sadistic acts?

Ilan Stavans and Frederick Luis Aldama explore the meanings of laughter and humor through a series of funny, insightful conversations. The conversations focus on how laughter functions as a social tool. They also explore what laughter represents in different social situations. As it states in the preface, “our inability to tickle ourselves tells us about the psycho-social-implications of laughter.” Meaning that humor is not the only source for laughter. We laugh for various reasons. Many have to do with the social situations where humor might not even be present. Why do we want to laugh when social interactions become awkward? Why do we internalize our humor instead of saying all the jokes that come to mind?

The book consists of five different chapters—the chapters function as shifts between the conversations dealing with different views on what laughter represents and what humor represents. The book opens with a clear summary to their themes and main points. The first chapter consists of funny exchanges between Aldama and Stavans on the sources of humor. They discuss the way humor is represented in media, art, and philosophy. The second chapter discusses ridicule—this chapter weaves their ideas of ridicule through religion, death, Cervantes, Plato, and several other subject matter. They dissect what they personally find funny as an attempt to understand why they laugh. Stavans then proves his expertise on Don Quixote of La Mancha. In this chapter, they discuss the issues with translating humor between cultures, race, and language. Chapter four introduces several ideas about jokes and why we laugh at them. They discuss the issues of racism and prejudices found in jokes. Do we always have to be politically correct when it comes to jokes? Not always… especially, if you do a good job with the joke. They discuss what humor does to film and, again, talk about the issues with humor translating between languages and cultures. They provide concrete, relevant examples for the translation of humor. An informative discussion occurs on films like Casa de mi padre and Machete. Why was it so hard for people to find Casa de mi padre funny? Because its humor didn’t translate to the American audience. As Aldama argues, unless you are familiar with telenovelas or Mexploitation, then many of the jokes are going to go over your head. The closing chapter dives into of taboo subjects and what might just be too offensive.They contemplate these issues and consider the consequences from offensive humor.

“Humor is a breather. It interrupts life as routine.”

If you are anything like me, you might have a hard time internalizing your laughter. I find myself laughing constantly making a joke out of pretty much anything. This book shed some light on what the laughter might represent. For me, the more uncomfortable the situation, the more I joke around. The more stress I have in my life, the more I find myself laughing with other people. Laughter is a social activity. It feels best around others. The conversations in Laughing Matters are loaded with different views on humor and laughter. Stavans and Aldama don’t leave any funny stone unturned. If you are curious how humor and laughter function in art, literature, and media, this book will answer all your questions. You will laugh and not cry… well, maybe tears of laughter.

Andrew Hudgins, author of The Joker: A Memoir and A Clown at Midnight

Doors of insight fly open during this exhilarating and thought-provoking, kinetic tête–à–tête between two thinkers impassioned by reading, writing, and laughing. Pondering why “humor is central to any pluralistic society,” they range so engagingly across cultures, media, history, and philosophies that the book could well have been subtitled How to Have Fun with Erudition.

Aldama and Stavans’ conversation weaves effortlessly from the great thinkers on laughter to today’s neurobiological insights to offer witty, wide-ranging, and incisive insights into our planet’s great creations: from Don Quixote and Shakespeare plays, to Tex-Avery cartoons, Chaplin’s Gumby-like elasticity, and even politically incorrect stand-up. You’ll learn why humor and laughter work in all that we create and do—and you’ll do so with a smile.

You’ve had dinner with Andre; now try breaking bread with Fede and Ilan. Drawing on their capacious cultural knowledge and considerable wit, two eminent Latino scholars and engaging raconteurs demystify laughter. Why do we laugh, even against our will? What’s so funny about irony and exaggeration? How does humor affect our politics? Does laughter heal? To explore these questions, these powerhouse pensadores delve into humor both profound and popular – from the Talmud, Aristotle, Rabelais, Cervantes, Shakespeare, and Borges through comic books, Cantinflas, telenovelas, and ethnic jokes. After reading this book you will never look at humor in quite the same way. . .and just maybe you’ll never laugh the same way either.

Aldama and Stavans make a significant argument for tracing an alternate, more global esthetics of humor. In seriously investigating the subversive nature of the belly laugh, from Aristotle to Cervantes to Junot Díaz and beyond, they show us how to weave together a broader sensibility of the history—and the ethics—of hilarity.

Our authors scour the world of humor from stand-up Jewish comedians to classic writers such as Cervantes and Rabelais to those, like Freud and Bergson, who have sought to account for why we laugh.  The conversational format of this book allows its authors a freedom to range that would be impossible in a more conventional mode of discourse.  And the differences in sensibility between the authors—an Aldama always prepared to theorize and a Stavans seeking ways to express his skepticism—makes for a book that is itself as amusing as it is enlightening.

This delightful and intellectually engaging conversation explores the nature of laughter and humor, questioning and expounding on Western European and Latin American literary works that build humor into their pages.  In a decidedly erudite manner they take us on a journey through philosophers such as Plato, Aristotle, Descartes, Kierkegaard, Nietzsche, and Bergson as well as literary geniuses such as Cervantes, Shakespeare, and Borges.  Their lively and spirited discussion sheds light on today’s pop culture: from chistes to TV shows and films. Entertaining, insightful, and learned it provides a splendid excursion into the nature of humor and its twin laughter in Western civilization.