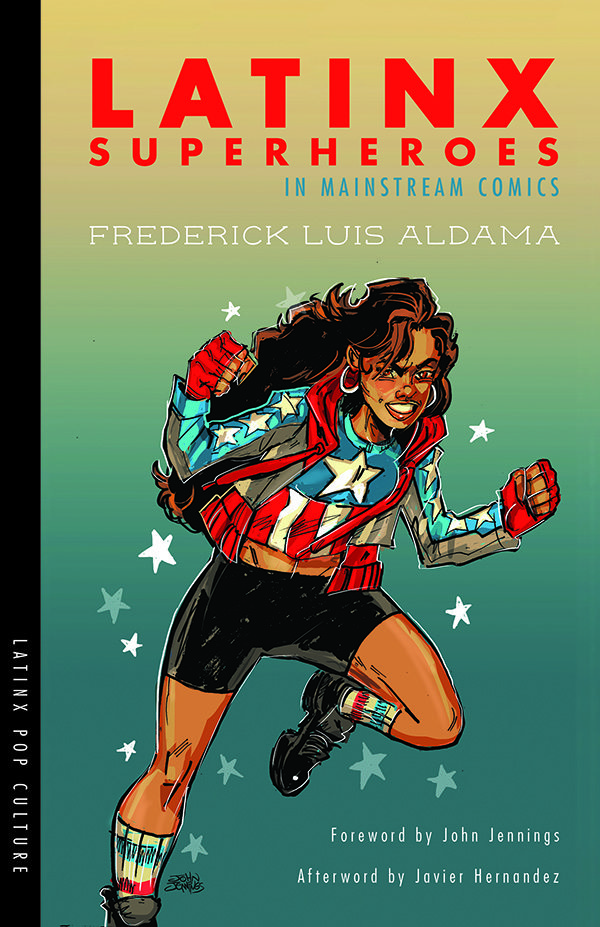 Whether good or evil, beautiful or ugly, smart or downright silly, able-bodied or differently abled, gay or straight, male or female, young or old, Latinx superheroes in mainstream comic book stories are few and far between. It is as if finding the Latinx presence in the DC and Marvel worlds requires activation of superheroic powers.

Latinx Superheroes in Mainstream Comics blasts open barriers with a swift kick. It explores deeply and systematically the storyworld spaces inhabited by brown superheroes in mainstream comic book storyworlds: print comic books, animation, TV, and film. It makes visible and lets loose the otherwise occluded and shackled. Leaving nothing to chance, it sheds light on how creators (authors, artists, animators, and directors) make storyworlds that feature Latinos/as, distinguishing between those that we can and should evaluate as well done and those we can and should evaluate as not well done.

The foremost expert on Latinx comics, Frederick Luis Aldama guides us through the full archive of all the Latinx superheros in comics since the 1940s. Aldama takes us where the superheroes live—the barrios, the hospitals, the school rooms, the farm fields—and he not only shows us a view to the Latinx content, sometimes deeply embedded, but also provokes critical inquiry into the way storytelling formats distill and reconstruct real Latinos/as.

Thoroughly entertaining but seriously undertaken, Latinx Superheroes in Mainstream Comics allows us to truly see how superhero comic book storyworlds are willfully created in ways that make new our perception, thoughts, and feelings.

The most prolific and insightful scholar writing on the intersection of Latino/a identity, politics, and the popular, Aldama provides yet another gleaming gem that throws light on how ethnicity and representation in comics operate. This groundbreaking book on Latinx superheroes enriches our perception of the politics of difference. It blows wide open how beliefs that reside in the images and ideas surrounding Latinoness circulate in American society.

Minorities have always been vital to superhero adventures, but generally in hidden, almost clandestine ways. Aldama’s work broadens the range of these minorities while demonstrating that the censorship of ethnic communities is still a key issue not only in comics but in mass media culture at large.

A gem for university classes, researchers, comic book fans, and the forces of progress.