Latinos in the End Zone 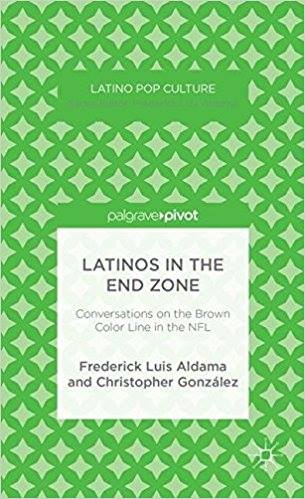 Frederick Luis Aldama and Christopher González offer a thought-provoking conversation on the history of Latinos in the pro football leagues.

As they weave their way through significant points where culture, politics, and history congeal, Aldama and González thread together an alpha-to-omega, all-encompassing story of Latinos in the NFL.

Journal of the West

Although the investigation focuses primarily on the cultural impact of American fútbol, the code-switching dialogue—divided into five chapters and often employing the use of Spanish lexicon—provides a free-flowing intellectual exploration of related social issues in all major sports, and even includes interviews with NFL Latino legends such as Joe Kapp, Tom Flores, and Jim Plunkett.

Few,if any, investigations reveal the societal and cultural factors that have historically left Latinos on the sidelines, but with the evolution of the game and society, Aldama and González suggest that Latino figures in leadership roles such as Tom Flores (former president and general manager,Seattle Seahawks), Ron Rivera (head coach, Carolina Panthers),and Tony Romo (quarterback, Dallas Cowboys) further increase Latino visibility in and outside stadium walls.

Interested in going beyond a generic reading into the history of US racial sporting integration, Aldama and González open up long-overdo conversations on the “brown colorline” and discuss how it has played out in the National Football League (NFL) since 1920. In their exploration of the NFL, accordingly shaped by 20th century raced gendered-nationalist dimensions, Latinos in the End Zone  resuscitates the lost experiences of a determined Latino athletic body. The authors historicize the Latino football player and carefully thread the social-cultural, political-economic-psychological contributions they have had in the “nearly century-old history of the NFL”(preface, vii). . . .

In all, Latinos in the End Zone honors famous Latino football players by recovering their misplaced legacies, forgotten contributions alongside the NFL’s ascendency as a leading 21st  century American cultural pastime. In a moment when the militarized-policing of browned-bodies overlaps with the containment of Latina/o Chicana/o struggles for public education, Latinosin the End Zone: Conversations on the Brown ColorLine  can only be understood as a groundbreaking resource for the continued advancement of the Latino community both on and off the American football field.

Football might be the most suitable metaphor to understand the role of Latinos in the United States today.

William Nericcio, author of Tex-Mex: Seductive Hallucinations of the “Mexican” in America

Who knew that the NFL was Chicano? That the National Football League owed much of what it calls its legend to Americans of Mexican descent? Well Aldama and González did and do and with Latinos in the End Zone they share with football fans and pointy-headed professors alike (not a group that often tailgates together) compelling, evocative, and moving stories that trace the Mexican DNA at the heart of the NFL.

From Amazon | From Palgrave | From Barnes & Noble