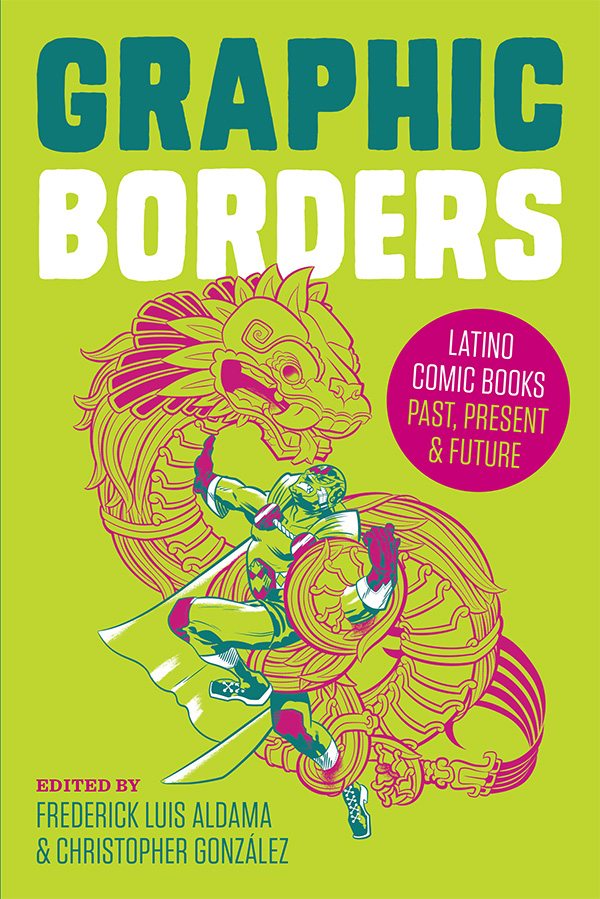 Co-edited with Christopher González, Frederick Luis Aldama presents the most thorough exploration of comics by and about Latinos currently available.

From the influential work of Los Bros Hernandez in Love & Rockets, to comic strips and political cartoons, to traditional superheroes made nontraditional by means of racial and sexual identity (e.g., Miles Morales/Spider-Man), comics have become a vibrant medium to express Latino identity and culture. Indeed, Latino fiction and nonfiction narratives are rapidly proliferating in graphic media as diverse and varied in form and content as is the whole of Latino culture today.

Thirteen essays and one interview by eminent and rising scholars of comics bring to life this exciting graphic genre that conveys the distinctive and wide-ranging experiences of Latinos in the United States. The contributors’ exhilarating excavations delve into the following areas: comics created by Latinos that push the boundaries of generic conventions; Latino comic book author-artists who complicate issues of race and gender through their careful reconfigurations of the body; comic strips; Latino superheroes in mainstream comics; and the complex ways that Latino superheroes are created and consumed within larger popular cultural trends. Taken as a whole, the book unveils the resplendent riches of comics by and about Latinos and proves that there are no limits to the ways in which Latinos can be represented and imagined in the world of comics.

Journal of Graphic Novels and Comics

Graphic Borders is a meaty and expansive read, with a core through-line of unpacking the idea that Latina/o comics are redrawing the known borders of comics narrative. . . . The writing in this collection is strong and compelling, the themes wide ranging and cohesive, and the message highly relevant. If you want to get a great sense of what Latino/a comics are doing in the culture right now, this is a necessary starting point to your journey.

For those wanting a deeper look at the wells of artistic styles, cultural trends, and historical pressures that influenced our current crop of Latino artist-authors, this anthology digs wide and deep.

Once upon a time, in a galaxy as close as your local comic book store, worlds populated with Latino superheroes, misfits, legends, and all manner of wondrous characters filled a gaping void in American graphic fiction. Graphic Borders is a must-read for anyone studying graphics and the emerging multi-cultural, multi-racial, multi-sexual, multi-abled, multi-dimensional literary imagination that our artists and storytellers keep building, gorgeously, every day.

With the proverbial ‘brown tide rising’ come swells of creativity and diversity in US Latino comic books and graphic nonfiction. This timely critical intervention delivers wide-ranging and comprehensive critical thinking about comics as a malleable, exciting, and innovative mode of storytelling about Latina/o lived experiences, creative industry, and speculative aspirations and desires. It opens imaginations wide to the splendors of well-known and emergent Latina/o comic artists—and Latinos in the comic book mainstream. Like Latinos in comics today that know no bounds, this collection soars to new scholarly heights.

Holy Blatino Spidey! Aldama and Gonzalez leave no stone unturned. Addressing alternative Latino comic book auteurs like Los Bros Hernandez as well as mainstream creators like Cantú and Castellanos, the rich and varied theoretical explorations included in this volume extend the range and deepen the insight of Aldama’s seminal Your Brain on Latino Comics. Trust your spider-sense. This collection will slingshot you into danger zones, just as today’s Latino graphic artists are explosively transmogrifying all of US culture.

In Marvel comics the Watchers are an alien race that roams the galaxies observing and documenting all that goes on. The essayists in this collection are the ‘Watchers’ of the micro-universe that is Latino comics. Aldama and González gather an extraordinary league of comic book Watchers who observe and analyze as well as make visible the living, breathing archive of those at the vanguard of Latino sequential art creation. Lock those tractor beams on this one. It’ll blow your mind.

Like a cunning dynamic duo spun from the pages of a comic book, Frederick Luis Aldama and Christopher González, whether in tight shiny spandex or not, have come up with one hell of a book. One part academic tome, one part gossipy fanboy backstory, one part magic, these Latinx denizens of the Ivory Tower, working with the University of Texas Press… have published an anthology that is already receiving rave reviews (read the rest of the expansive review here).