Critical Approaches to the Films of Robert Rodriguez 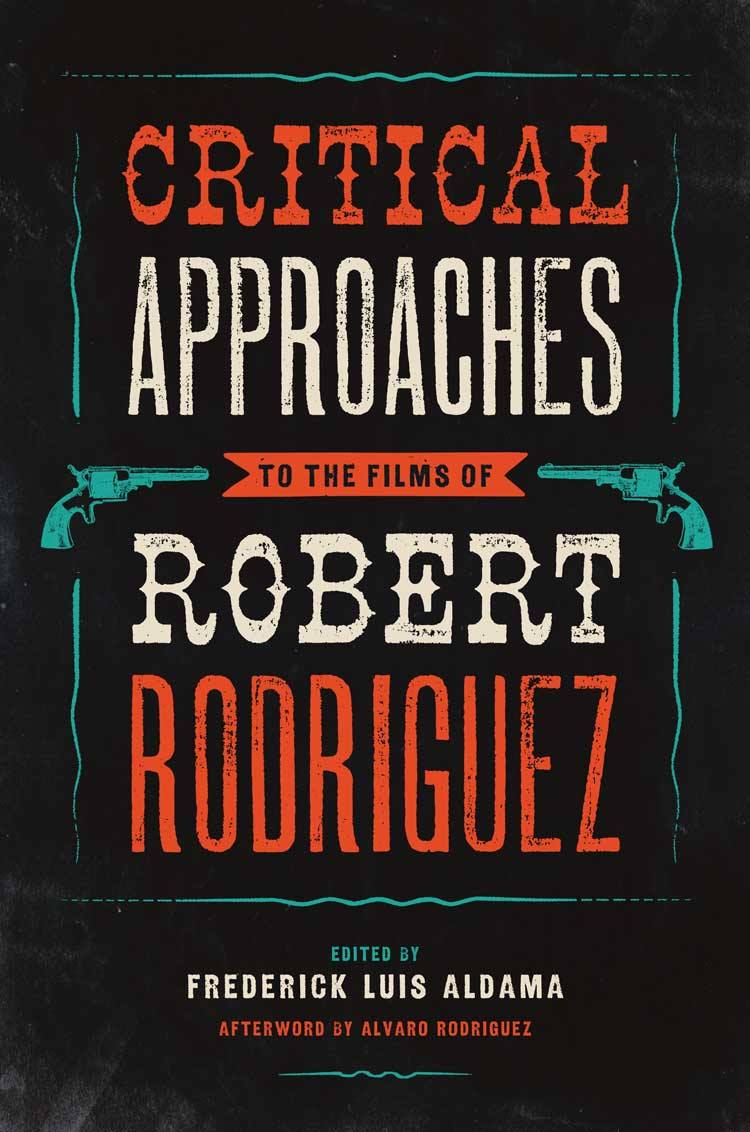 The Cinema of Robert Rodriguez (2014) was the first full-scale study of one of the most prolific and significant Latino directors making films today. In this companion volume, Aldama enlists a corps of experts to analyze a majority of Rodriguez’s feature films, from his first break-out success El Mariachi in 1992 to Machete in 2010.

The essays explore the formal and thematic features present in his films from the perspectives of industry (context, convention, and distribution), the film blueprint (auditory and visual ingredients), and consumption (ideal and real audiences). The authors illuminate the manifold ways in which Rodriguez’s films operate internally (plot, character, and event) and externally (audience perception, thought, and feeling).

The volume is divided into three parts: “Matters of Mind and Media” includes essays that use psychoanalytic and cognitive psychology to shed light on how Rodriguez’s films complicate Latino identity, as well as how they succeed in remaking audiences’ preconceptions of the world. “Narrative Theory, Cognitive Science, and Sin City: A Case Study” offers tools and models of analysis for the study of Rodriguez’s film re-creation of a comic book (on which Frank Miller was credited as codirector). “Aesthetic and Ontological Border Crossings and Borderlands” considers how Rodriguez’s films innovatively critique fixed notions of Latino identity and experience, as well as open eyes to racial injustices. As a whole, the volume demonstrates how Rodriguez’s career offers critical insights into the filmmaking industry, the creative process, and the consuming and reception of contemporary film.

“Rodriguez (b. 1968) is an exceptionally interesting filmmaker.  His work stretches all the way from his breakthrough indie feature El Mariachi (1992)—which he shot for an amazing $7,000 and eventually earned more than $2,000,000 in rentals—to the Machete films (the first of which appeared in 2010).  In between are such films as Desperado (1995), which was more or less a remake of El Mariachi; From Dusk Till Dawn (1996), an inventive vampire genre mash-up; Spy Kids (2001) and Spy Kids 2: Island of Lost Dreams (2002), representing a sharp turn to more child-friendly fare; and Sin City (2005), a violent, hyperstylized noir homage that Rodriquez codirected with comic book artist Frank Miller and Quentin Tarantino.  Thus, there are many flavors to Rodriguez’s work, which is by turns kinetic, youthful, exuberant, and always deeply connected to Latino/a culture.  In this excellent volume, Aldama (English, Ohio State Univ.) brings together a gallery of talented scholars to tackle Rodriguez’s wide-ranging work.  The essays illuminate the ways in which Rodriguez plays with concepts of gender, race, and sexuality in his films, which owe a real debt to 1970s exploitation cinema and graphic novels.  This is a spirited, accessible introduction to Rodriguez’s output. Highly recommended.”

There have been small pockets of scholarly essays on Rodriguez’s films throughout the years. Recognizing and yet radically expanding on these works, Aldama has also published a collection entitled Critical Approaches to the Films of Robert Rodriguez (2015). This collection of essays adds a variety of approaches (critical race theory, cultural studies, and cognitive approaches, for instance) to Rodriguez scholarship.

With The Cinema of Robert Rodriguez (2014) and Critical Approaches to the Films of Robert Rodriguez (2015), Frederick Luis Aldama has written the first single-author scholarly monograph and edited the first collected volume of scholarship on the work of the most prolific U.S. Latina/o filmmaker to date. The two books share the explicit goal of fostering scholarship on Rodriguez and thus address a glaring lacuna in the existing literature. . . . these two books advance their common aims, both explicit and implicit, quite admirably, providing readers with import-ant biographical information about the filmmaker, technical insights into his film-making, and a range of thematic, analytical, and methodological approaches for interpreting Rodriguez’s films.

The collection’s scholarly essays illustrate the broad range of possibilities for analyzing Rodriguez’s work within frameworks of fi lm, cognitive, and Latina/o studies. For example, although five of the nine collected scholarly articles adopt cognitive approaches, each offers a unique framework and nuanced reading of Rodriguez’s films. Sue J. Kim employs cognitive concepts such as chunking, typification, and cause-and-effect to highlight previously overlooked connections between Rodriguez’s more family-friendly children’s films and his more violent genre flicks. James J. Donahue adapts Alan Palmer’s typology of intermental units from Social Minds in the Novel (2010) in order to read the developmental progression of the films of Rodriguez’s “Mexico Trilogy.” Yet the highlight, in my opinion, of the cognitive studies work in the collection is a section titled “Narrative Theory, Cognitive Science, and Sin City: A Case Study,” which consists of three essays by Patrick Colm Hogan, Emily R. Anderson, and Erin E. Eighan. Each scholar takes a distinct approach to analyzing how Robert Rodriguez and Frank Miller collaboratively adapt Miller’s graphic novel to fi lm: Hogan looks at the film’s opening three-minute sequence as an example of painterly cinema; Anderson explores how the fi lm “remediates” the graphic novel, and Eighan discusses through dual coding theory how the visual and aural elements in Sin City stimulate different systems in the brain. This suite of essays, or “case study,” as Aldama aptly puts it, demonstrates the rich interpretive possibilities of Rodriguez’s oeuvre when seen through the lens of cognitive studies. The four remaining scholarly essays similarly exemplify diverse approaches for analyzing Rodriguez’s fi lm within Latina/o studies. Phillip Serrato reads the developmental arc from child to adult of the male protagonist Juni in the Spy Kids series as a critique of dominant fantasies of Latino masculinity. Christopher González explains how, through sly uses of genre and intertextuality, Rodriguez articulates “post-post-Latinidad” in Planet Terror (2007). Enrique García also looks to Planet Terror to discuss how the zombie apocalypse allows Rodriguez to imagine a transnational utopian future founded on feminism and mestizaje. Finally, Zachary Ingle draws connections between blaxploitation films of the 1970s and Rodriguez’s Machete (2010) to analyze how the fi lm ambiguously engages the “Latino Threat Narrative,” or the fear that Latina/os will never assimilate into U.S. Anglo-American culture.

and author of Argentine, Mexican, and Guatemalan Photography: Feminist, Queer, and Post-Masculinist Perspectives

Aldama’s done it again! With Critical Approaches he brings together preeminent scholars of film and popular culture to throw wide open the portals into understanding Rodriguez’s rich and bountiful cinematic world. Profoundly responsive to Rodriguez’s artistic vision and practice, the groundbreaking scholarship herein powerfully undercuts all those misguided judgments about Latino cultural production. Critical Approaches will certainly cement Rodriguez as at once an entertainer of the first order and as a dissonant creator who radically carves out new experiential spaces for Latinos today and tomorrow.

William Anthony Nericcio, Director of the Master of Arts in Liberal Arts and Sciences program, and Professor of English and Comparative Literature and Chicana/o Studies, San Diego State University

Aldama’s Critical Approaches is like a film itself! Picture it: over the Western horizon rides a talented posse of wily vaqueros y vaqueras, like some ridiculously over-talented, ivory-tower-ensconced version of The Magnificent Seven—only there are twelve of them and running lead, the lucky thirteenth, Prof/Caballero Aldama. They are packing six-shooters with sharp piercing intellectual ammo: Kim’s cognitive dynamite, Serrato’s mighty boogers, Hogan’s deft palette, Anderson’s whiptastic noir, Eighan’s nasty multimodalities, González’s mighty intertextuality, García’s randy miscegenation, Ingle’s fraught frontera, Donahue’s social mind reading, Stavans’s probing paradigms—with Saldívar and Fojas there too, riding shotgun. Before they ride off into the sunset, this rambunctious posse of cultural critics holds forth and lays bare the complexity of our great cineaste of the Americas, Robert Rodriguez. Buy this book. Teach this book. Or else, pardner—you’ll be messing with the magnificent trece, ese!

This lively collection investigates the broad range of Rodriguez’s output, from his explosive action flicks, to his hurly-burly children’s adventures, to his groundbreaking cinematic comic-book revamp, Sin City. Uniformly informative, insightful, and engaging, these analyses are as ingenious, varied, and entertaining as the films themselves.

Isabel Molina Guzmán, Associate Professor of Media and Cinema Studies and Latino/a Studies, University of Illinois,
and author of Dangerous Curves: Latina Bodies in the Media

The complex cinematic work of Robert Rodriguez finally gets its comprehensive due. Moving from El Mariachi to Sin City and crossing audience reception, content, and production, Aldama pulls together the most cutting-edge scholars in the field to provocatively map out Rodriguez’s significance to the study of film generally and Latina/o film specifically. If you love to watch, examine, and make film—it’s an absolute must-read!