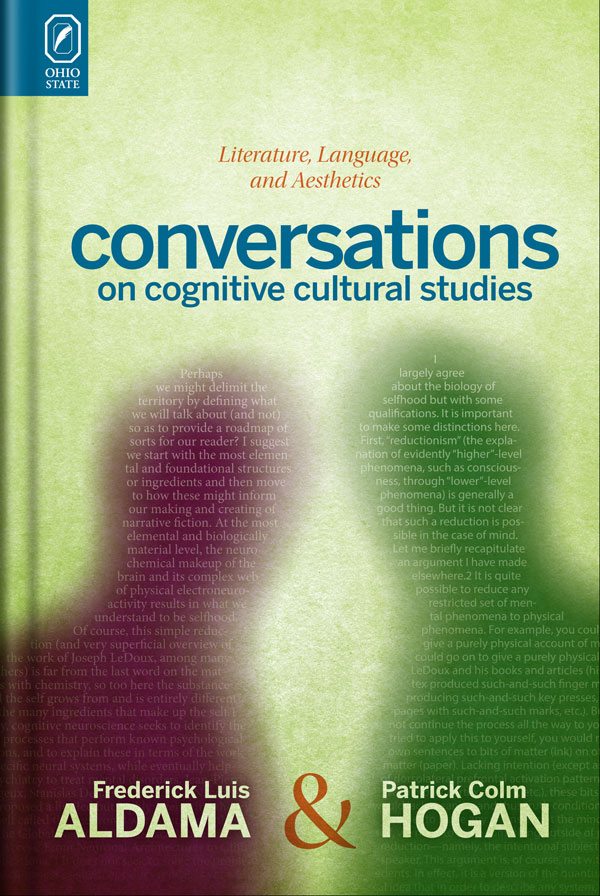 In recent years, few areas of research have advanced as rapidly as cognitive science, the study of the human mind and brain. A fundamentally interdisciplinary field, cognitive science has both inspired and been advanced by work in the arts and humanities.

In Conversations on Cognitive Cultural Studies, Frederick Luis Aldama and Patrick Colm Hogan, two of the most prominent experts on the intersection of mind, brain, and culture, engage each other in a lively dialog that sets out the foundations of a cognitive neuroscientific approach to literature. Despite their shared premises, Aldama and Hogan differ—sometimes sharply—on key issues; their discussion therefore presents the reader not with a single doctrine, but with options for consideration—an appropriate result in this dynamic field.

With clarity and learning, Aldama and Hogan consider five central topics at the intersection of literature and cognitive science. They begin with the fundamental question of the nature of the self. From here, they turn to language, communication, and thought before moving on to the central issue of the structure and operation of narrative. The book concludes with thought-provoking explorations of aesthetics and politics. Illustrating their arguments with work that ranges from graphic fiction and popular cinema to William Faulkner and Bertolt Brecht, Aldama and Hogan leave the reader with a clear sense of what cognitive cultural studies have already achieved and the significant promise the discipline holds for the future.

Aldama and Hogan have not written a book of scientific vulgarization. Their conversations are an often very technical approach of cutting edge research, yet always presented with exceptional didactic talent and flair and an open eye to cultural complexity and diversity in the broadest sense of the word. One of the great qualities of the book in this regard is the authors’ familiarity with non-Western cultures (Indian culture for Hogan, Latin-American culture for Aldama). This openness is not a way of demonstrating a sense of political correctness (on which the authors have many thought-provoking things to say), but a way of putting into practice the values and questions of cultural studies for cognitive studies (and vice versa).

Aldama and Hogan’s refreshing Conversations on Cognitive Cultural Studies begins with an exemplary brief introduction to cognitive theory for a literary and cultural studies readership. It then opens up into an accessible, thoughtful dialogue, revealing areas of contention, mystery, and potential discovery. This meeting of minds ranges as widely in its discussion as it delves deeply into its core topics of language, the self, narrative, aesthetics, ethics, and culture. The discussions it will stimulate, at symposia and in seminars, will benefit from the authors’ capacious frames of reference and imaginative questing for truths and explanations beyond the boundaries of traditional literary studies.

This book of conversations discovers a superb format for the treatment of theoretical problems, for it allows its two authors, each bringing his own distinct perspective and background to the discussion, to engage with each other and zero in on an uncommonly wide range of aesthetic concerns—among many others, the role of linguistics in understanding literature and the insights that neuroscience offers to the arts.

In Conversations on Cognitive Cultural Studies: Literature, Language, and Aesthetics, Frederick Luis Aldama and Patrick Colm Hogan illuminate the myriad implications of cognitive studies for the study of literature. Scrutinizing issues ranging from subjectivity to aesthetics to history and politics, they seek ever greater precision in our methods and assumptions. This lively critical dialogue is sure to spark much-needed thought and discussion.

Conversations on Cognitive Cultural Studies gives a strong sense of cognitive studies in their present state of organization, as represented by two of its most respected and best informed spokesmen, who are seen grappling with basic and, in some cases, still unresolved problems in aesthetics.

From Amazon | From The Ohio State University Press