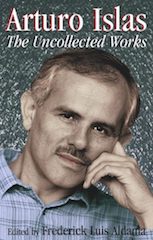 I collect in one volume the unpublished works of acclaimed of the late novelist, poet, essayist, and short story writer, and professor, Arturo Islas (1938-1991). Well known for his two insightful novels, The Rain God and Migrant Souls, his untimely death to AIDS truncated a productive and influential career that has left an unbridgeable gap in Latino/a letters.

Islas was a dedicated, thoughtful, and style-conscious writer, who promoted a sense of responsibility to community and art for both writers and critics. The quality of his commitment was matched by the example he set in delving into the aesthetics and psychology of Latino/a creativity, an exploration that took him to uncompromising confrontations with his own traditional upbringing.

A seasoned scholar and professor in the English Department at Stanford University for most of his professional life, Islas maintained an extensive collection of works, records, and papers. I have organized these materials and edited them so that they may be accessible and broaden the vision of Arturo Islas as writer and thinker.

Aiming to ‘stretch and broaden’ our perception of Islas as writer and thinker, editor Aldama here presents a collection of Islas’s recovered work—short stories, poetry, and essays on Chicano letters—that he never had the opportunity to publish. . . .The essays and lectures on Chicano literature are admirably direct and clear, while the fiction and poetry stems largely from gay culture and may be a revelation to some readers. On the whole, the volume certainly demonstrates why Islas has become a beacon and a model for younger gay writers. Recommended for libraries with holdings in gay and Chicano literature.

From Amazon | From Arte Público Press