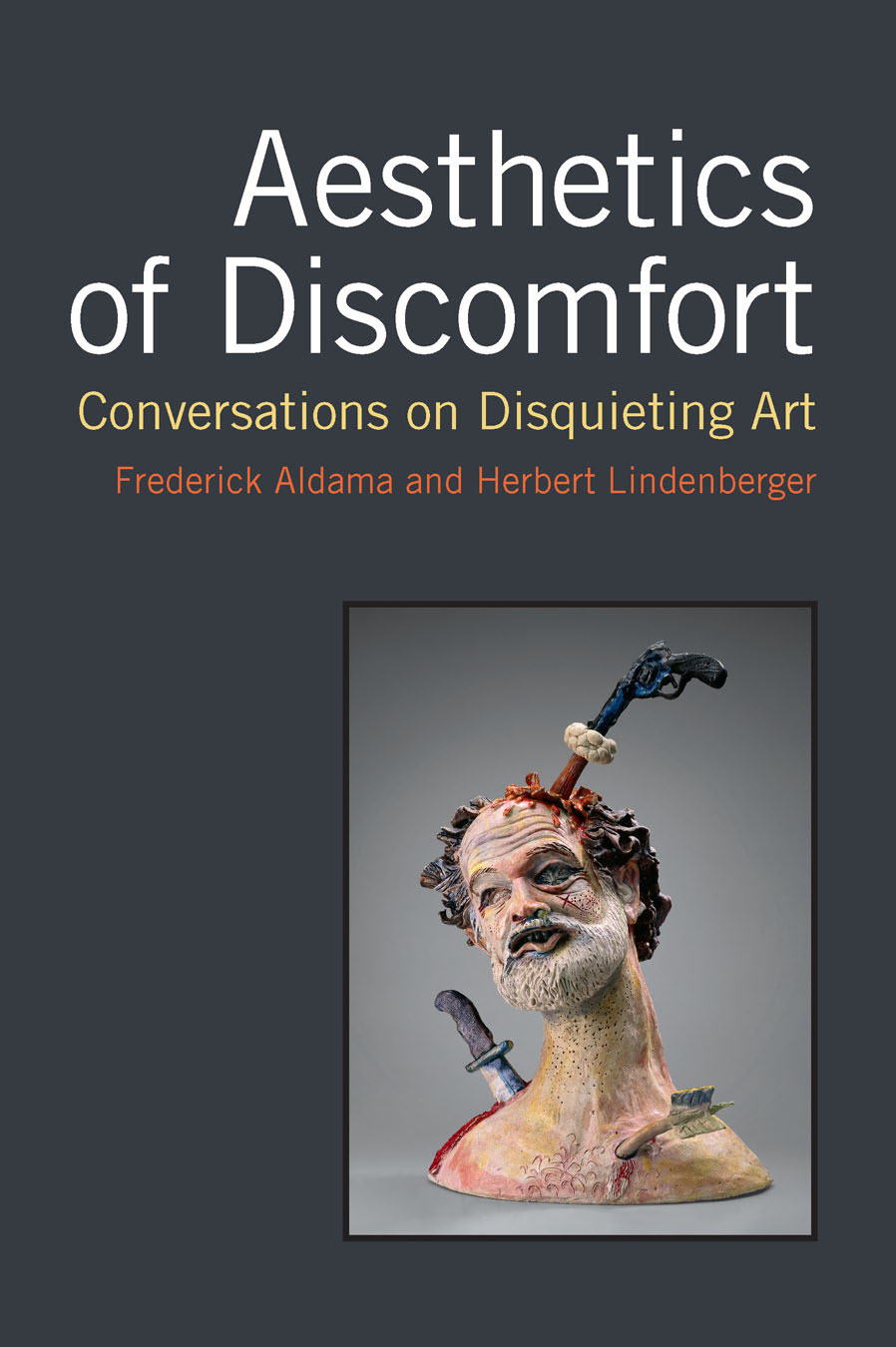 Through a series of provocative conversations, Frederick Luis Aldama and Herbert Lindenberger, who have written widely on literature, film, music, and art, locate a place for the discomforting and the often painfully unpleasant within aesthetics. The conversational format allows them to travel informally across many centuries and many art forms.https://professorlatinx.la.utexas.edu/wp-content/uploads/2017/07/Aesthetics-Discomfort-Cover-200×300.jpg

They have much to tell one another about the arts since the advent of modernism soon after 1900—the nontonal music, for example, of the Second Vienna School, the chance-directed music and dance of John Cage and Merce Cunningham, the in-your-faceness of such diverse visual artists as Francis Bacon, Pablo Picasso, Willem de Kooning, Egon Schiele, Otto Dix, and Damien Hirst.

They demonstrate as well a long tradition of discomforting art stretching back many centuries, for example, in the Last Judgments of innumerable Renaissance painters, in Goya’s so-called “black” paintings, in Wagner’s Tristan chord, and in the subtexts of Shakespearean works such as King Lear and Othello.

Aesthetics of Discomfort provides original insights both into particular art forms and into individual works within these forms. Among other matters, it demonstrates how recent work in neuroscience may provide insights in the ways that consumers process difficult and discomforting works of art.

Aesthetics of Discomfort contributes to current aesthetic theory by charting the dialogue that goes on—especially in aesthetically challenging works—between creator, artifact, and consumer.

Seasoned humanities scholars Aldama and Lindenberger argue that no philosophical consideration of art can be complete without examining how discomfort contributes to the development of aesthetic relationships. . . . What distinguishes these discussions are the authors’ interest in neurocognition and the notion that our brains are hardwired to link sensory information with specific emotional responses. . . .The authors thus explore the mechanisms of discomfort as well as its antidotes (boredom, familiarity, lack of psychological engagement). . . .

Aesthetics of Discomfort is an essential purchase for college and university libraries, as it inspires curiosity and further discussion about how and why art evokes our aesthetic responses.

Discomfort, in all its forms, is what most effectively pulls us out of ourselves and forces us to see the world in a new light. In this ambitious and wide-ranging study, Aldama and Lindenberger put under the lamp a vast array of material from music, film, painting, and other arts to show us that only work that rearranges our perceptions of reality, that questions the many assumptions we operate under, and challenges us to view things in an entirely different fashion—in short, to directly question what we think we know—has anything real to teach us. An essential read.

A stroll through the architecture of discomfort by two non-architects could be, well, uncomfortable. Instead Lindenberger and Aldama treat their readers to fresh perspectives on familiar, if disquieting, places. During an itinerant conversation that wanders from caves to cities, past mausoleums, dungeons, 1950s tract houses, zoos, museums, and mid-century modern masterpieces where shape disregards function, they identify the purposeful loss of conventions of beauty in the modern era. They all but prove that discomfort is in the eye of the beholder.

This book opens up territory that is by its nature not just discomforting but often downright repellent and, therefore, rarely addressed with any discipline, much less theorized. Perhaps for the same reason, it is territory that I think today’s students especially are going to be both willing and wanting to investigate. It is also a subject that the academic culture, as well as a larger demographic, has been ready for.

From Amazon | From University of Michigan Press | From Barnes & Noble